Working on the First Coast: Window washer turns his business into 23 employees 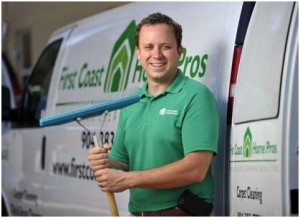 There's more to washing windows than Windex and paper towels, says Josh Kennedy, the owner of First Coast Home Pros. In four years, the company has grown to 23 employees and nearly 5,000 customers.

Josh Kennedy had $300 in the bank when he started his business just four years ago, washing windows while standing on a borrowed ladder. Now First Coast Home Pros has grown to 23 employees.

Kennedy had washed windows during summers back in Ohio. Even after graduating from college, he worked for that company for a year or two before heading off to travel and other jobs.

After his parents moved to Jacksonville, he came down, liked it and settled in Springfield.

So how you’d get this started?
I spent my first two weeks handing out fliers in Springfield, Riverside, San Marco, Ortega, the older neighborhoods. I mean, I was real aggressive. I lost about 10 pounds in two weeks. I just wouldn’t stop until it was too dark.

You mean you were an aggressive salesman?
No, I didn’t knock on doors. I just left fliers. If the owner was outside, I’d say hello and let them see my face. I’m friendly. I think the little things matter, like having your shirt tucked in rather than out. And I’ve been busy ever since.

What’s the company now?
Well, we’ve got 23 employees, 11 vehicles and almost 5,000 customers. We grew 300 percent in our second year and every year since we’ve grown right about 100 percent.

And it’s all kinds of cleaning?
We have teams of specialists. A maid service division; windows, pressure washing and roof; carpet, tile and grout; air duct and dryer duct.

You know, the country was in a recession at the time, right? Lots of companies were folding.
When you’re small, you can be a lot more nimble. My mentality was that maybe I’m going to charge 10 percent less than the other guys, so I’m just going to have to work 10 percent more to get the same results.

It didn’t sound like you had much startup money.
My biggest expense was $60-$80 for fliers at Kinko’s. That was a ton of money to me at the time. I borrowed my first ladder from my father.

How have you financed the growth? Banks?
No, banks will not touch a business that is one or two or three years old. At least not with me. They’ll finance vehicles; we’ve got a $75,000 carpet cleaning truck.

Where’d you get the rest of the funding?
I just put everything back into it. In 2007, my adjusted gross income was something like $13,000. So I was used to living on practically nothing and I had no fear of investing heavily back into the business.

Are most of your customers higher-end homes?
Obviously, the more disposable income you have the more you can afford our services. The average home is a larger home in a nicer neighborhood. But we clean homes that are 1,300-1,500 square feet. These are people who don’t want to do it themselves, so we do it for them.

And a lot of people just hating washing windows. Other than carpet cleaning, is it usually stuff that people could do themselves?
Most of it. But there’s a lot of training involved. It actually takes our people the longest to learn windows.

It’s not just Windex and a paper towel?
You know, we have people apply and say, sure they can do that. Then you hand them a squeegee and they look like a 2-year-old.